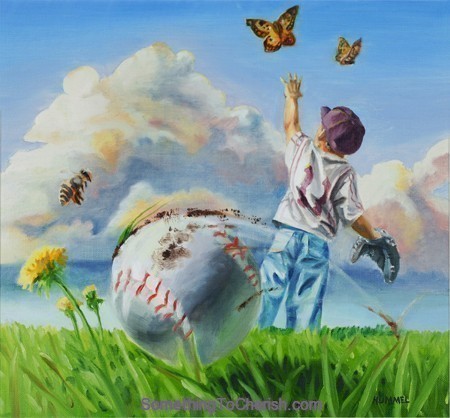 “Right Field” by Benjamin Hummel was selected for the cover of
Barefoot Path: Exploring childlike wonder and faith

Comments from the artist, Benjamin Hummel:

The phenomenon of little league sports can be pretty humorous at times. Attending many such outings with my younger brothers, there were always two or three (usually my siblings among them), who would find interest in anything other than the game in which they participated. It was easy to spot the casual player compared to the aspiring pro. The casual players would be the ones playing in their jeans.

Also, anybody who has played team sports in school knows the agony of being picked last, whether deserved or not. In baseball, the worst player was usually sent to deep right field, the part of the playing field where, except for the occasional left handed batter, the ball would never go. Often, the loneliness of such an isolation would draw the individual into the more beautiful or simpler parts of life, the cool summer breeze, the butterflies who seemed to float magically in the air, or the busy bee, working hard to provide for the comforts of the hive. Only then would this trance be shattered by the mad shouting of the crowd, several yards away, indicative of the baseball that just careened by the carefree child.

You can buy the Artist Print or Birthday Greeting Card from PaintingForLife.com

Cherish Flieder is an internationally-featured artist, designer, creative entrepreneur, and award-winning children’s book illustrator. Cherish’s designs have been seen in fashion apparel, books, magazines, greeting cards, gifts, crafts and more. She is the creator of Something to Cherish®, an artistic brand that joyfully connects with the hearts of women through her original watercolor mixed-media artwork on pre-treasured gifts, home decor, fashion accessories, and keepsakes. Cherish is also the founder of the art licensing community ArtLicensingShow.com. She regularly teaches marketing, illustration, design, and technology at Rocky Mountain College of Art & Design. Connect with Cherish on Instagram, Pinterest, Facebook, Twitter, Google + and LinkedIn.

View all posts by Cherish Flieder →